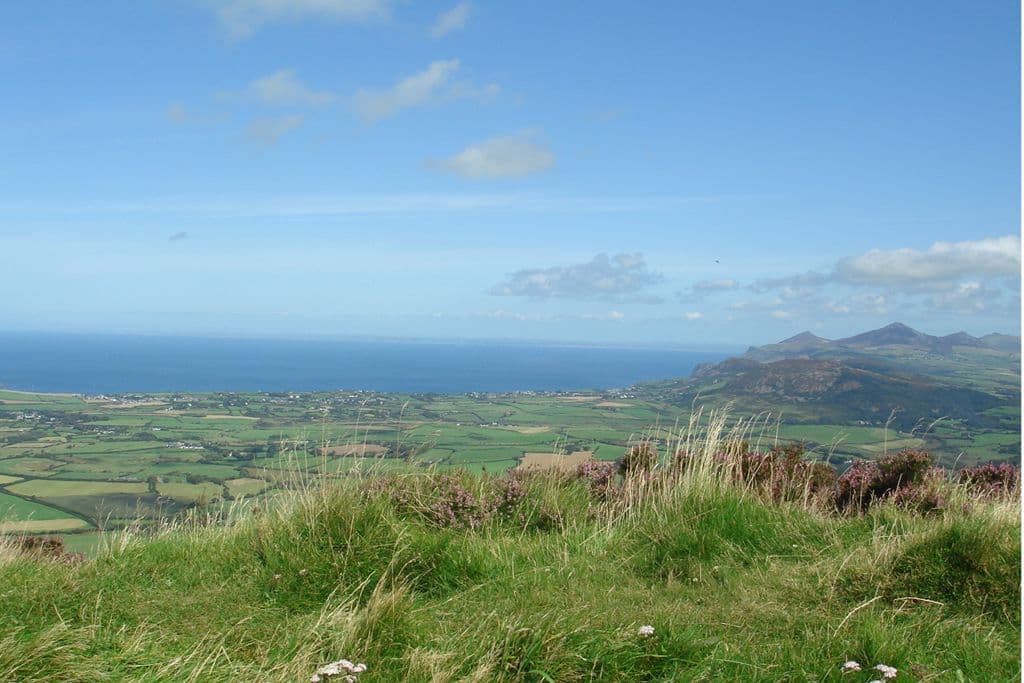 Llyn offers many attractions for all the family, go-karting, quad bike tours, soft play area, ten-pin bowling are available. Another popular attraction is the Rabbit Farm at Llanystumdwy.


Cinema at Neuadd Dwyfor Pwllheli an unique old fashioned cinema not a multi screen but a good cinema with very reasonable pricing and most likely some new release films.

Beaches, so many - where do we start- Whistling Sands, Llanbedrog Beach, Porth Iago, Porth Towyn so many quiet beaches and coves around the Peninsula, the list is endless. You will find a list in the cottage.

Enjoying our beautiful countryside can be undertaken by many modes, walking, horse riding, cycling, boat trips and even a plane trip from Caernarfon Airport

Clay Pigeon shooting, archery, and Quad bike Safaris are on offer at Glasfyn just the other side of Pwllheli.

Coarse and Trout fishing can be found at Eisteddfa Fishery at Pentrefelin near Criccieth. There’s a choice of lakes, pleasure, carp, fly, trout and family lake.
There is also a lakeside café.

Sea Fishing
There are numerous coves where you can fish off the rocks on the Peninsula however if you want to go on the open seas then contact
North Wales Fishing Charters who operate the Haf Aled ­Ш sailing from Pwllheli Marina. Rods and reels are provided on the boat.

We’ll start with the nearest the National Trust managed Llanbedrog Beach , delightful sandy beach with colourful beach huts that can be rented. The Galley Restaurant is virtually on the beach.

Pwllheli -  the capital town of the Peninsula has a choice of beaches, the West End, South Beach and of course Abererch Sands beach.

Porth Neigwl - Nearly four miles long and facing south west, Hells Mouth or Porth Neigwl is considered by many to be the best surf beach in Wales. Suited to strong swimmers only, this sandy beach is rarely over crowded.

Porthdinllaen - another National Trust beach. The Ty Coch Inn, recently voted 3rd Best Beach Bar on Earth is situated here. There are delightful walks along the headland through the Nefyn Golf Club. A great time for a walk is in the evening at sunset.

Porth Towyn near Tudweiliog is a lovely small beach, sandy with a few rock pools.

We have a list beaches around the Peninsula in the cottage. 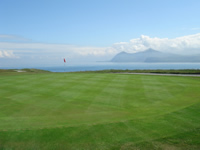 Abersoch - Another part links and parkland course it has developed into a challenging and scenic 18 hole par 69 course. It was originally designed by Harry Vardon and opened in 1908

Llyn Golf at Penrhos a 9 hole pay and play golf course and driving range, situated between the resorts of Pwllheli and Abersoch. The all weather golf facility is suitable for both beginners and experienced golfers wishing to improve their swing and all the aspects of their game. Now also has Foot Golf. 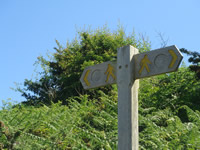 The 84 miles of the Llyn Coastal Path is a small percentage of the Wales Coast Path. It starts at Caernarfon and takes you all around the coastline of the LLyn Peninsula, past the tip at Uwchmynydd all the way along the Cambrian coast to the harbour town of Porthmadog

The majority of the route is on public footpaths, quiet country lands and beaches. However, there are a few instances where the path veers slightly inland, and onto higher ground where there are a few steeper climbs. You will experience some of the most notable views of Wales from the Coastal path.

As we are situated on the southern side of the Peninsula we will focus on this area. From the cottage you can start your day by ambling along the quiet country lane opposite the cottage to Penrhos and join the path at either Carreg y Defaid or near the golf course at Pwllheli. By keeping to the left you can follow the path towards Criccieth which is just further along than Llanystumdwy. The village where David Lloyd George is buried.

Should you wish to venture towards the tip of the Peninsula, keep right. Llanbedrog is the first village you will arrive at. You will find here a notable art gallery Oriel Plas Glyn y Weddw where you will see a fine selection of Swansea and Nant Garw Porcelain. The Oriel also has a café and shop. Walk through the Lost Woodland and up to the headland where you will see the iron man statue.

You can descend onto Quarry Beach the other side of the headland and then onto the vibrant village of Abersoch. Climb up onto the headland of Cilan and have some superb views over Cardigan Bay towards Harlech and even the tip of Pembrokeshire on the horizon. Turn the other way and you will see the expanse of Hell's Mouth -Porth Neigwl stretching out towards Rhiw.

On the road up to Rhiw you can take time out in the lovely garden of Plas yn Rhiw a property left to the National Trust by the late Keating sisters. This is one of the Trust’s smaller properties, and well worth visiting.

Walking along the path you may visit Porth Ysgo a small port where manganese from the local mines was shipped from.

Further on you will arrive at Aberdaron where you can visit Porth y Swnt, an interpretation centre where the newly decommissioned lantern from Bardsey Island Lighthouse is now housed. Carry on up from the village to the small hamlet of Uwchmynydd where you will see Bardsey Island. To visit arrange a trip from Porth Meudwy nearby.

We keep a comprehensive library of books, leaflets and maps of LLyn and Snowdonia. We also have videos and DVD’s of some walks, which will no doubt entice you to venture onto the paths.

The Llyn Peninsula is a very good area for bird watching. The Chough the emblem of Llyn, is one of the reasons why this special place is a Site of Specific Scientific interest (SSSI). Remember to bring your binoculars or telescope

Bardsey Island Bird Observatory is the only accredited observatory within Wales and one of around 20 such observatories in the British Isles. A trip to this peaceful relaxing island by boat should be experienced. During these boat trips you will be amazed at the dolphins, porpoises and seals that live in the area. Apparently there is a colony of 15,000 breeding pairs of Manx Shearwater across the island. You could also see Kittiwake, Storm Petrel, Razorbill and Guillemot are some of the breeding birds. Others could be Oystercatcher, Wheatear, Little Owl and Long-eared Owl

Pwllheli has it’s own nature reserve another bird watchers paradise at the inner harbour near the Welsh National Sailing Academy Here you will see many species especially so at low tide.

Gors Geirch Nature Reserve Cors Geirch is an extensive wetland site situated on the Llyn Peninsula, in the central part of the valley that runs between Nefyn and Pwllheli. This complex wetland reserve is home to numerous nationally rare plants and invertebrates and is one of the few examples of rich fen in north Wales outside of eastern Anglesey.

The reserve is at once recognized as:
• A wetland of international importance - Anglesey and Llyn Fens RAMSAR
• A Site of Special Scientific Interest - Cors Geirch SSSI
• A Special Area of Conservation - Corsydd Llŷn/ Llŷn Fens SAC

Cors Geirch actually borders one of our fields at nearby Rhydyclafdy.

The Glaslyn Ospreys is a very special area where a pair of breeding ospreys have returned to the river Glaslyn area for over 10 years. Over 300,000 people have visited the site at Pont Croesor.

For a car free day, why not hop on the bus just outside the cottage or from Efailnewydd just ½mile away (more frequent service). Travel to Pwllheli where you find the main bus station. Then you have a choice either to continue by bus or take the mainline Cambrian Coast Railway. There is no better way to view the delights of the coastline. One can venture towards Machynlleth, Shrewsbury or Aberystwyth.

However, you could stop off at Porthmadog and join:

Should you decide to go to Caernarfon, the train terminates below the majestic castle. Have a look around this interesting town, or take a guided tour. You will also find the main bus station just beyond the square. A good destination would be Llanberis with a choice of a 5 mile trip around the lake on the Llanberis Lake Railway or a trip up to Hafod Eryri at the summit of Yr Wyddfa (Snowdon) via theSnowdon Mountain Railway

Another narrow gauge railway further down the coast is the Fairbourne Railway which runs from the village to the mouth of the Mawddach Estuary. The line was completely rebuilt in 1984

The Talyllyn Railway is another interesting railway further on down the coast. Originally a slate railway, it runs for 7¼ miles through the Fathew Valley from Tywyn Wharf Station to Abergynolwyn Station. There is an interesting Race the Train event held yearly in August. The Railway also has many other events lined up throughout the year.

Visiting areas by train is great choice for all those rail enthusiasts, and a fabulous way to keep down carbon footprint, and enjoy the countryside at the same time.